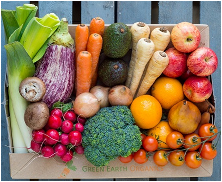 let us first see what does organic food mean?

Since the 1950s over 3500 man-made chemicals have made their way into manufactured everyday foods, along with pesticides, antibiotics and hormone residues.

Research completed by an international team of experts into  organic  compared  to  conventionally  produced  foods; concluded that  organic  crops  were  of  a  much  higher  nutritional  quality  than  their  non-organic counterparts (https://www.ncl.ac.uk/press/articles/archive/2015/10/organicvsnon-organicfood/

With regard to antioxidants (including Vitamin C), for example, many studies show that there are health benefits to eating a diet rich in antioxidants, with an increased intake linked with  protection against chronic diseases, including cancers. Switching to organic foods maybe equivalent to eating one or two additional portions of fruit and veg per day according to this recent research (https://www.ncl.ac.uk/press/articles/archive/2015/10/organicvsnon-organicfood/.

Getting organic food from a local or Irish supplier also means that the food is super fresh, next best thing to picking it yourself. This means that they taste better. Of course some key nutrients like Vitamin C are very fragile, and are easily destroyed by light, heat etc. Vitamin C was found to be higher, on average, in organically grown crops.

Is this more relevant for some of us?

I would argue it’s relevant for all of us but more so for small children, especially babies as their brains are still developing and they consume more food, pound for pound, than adults do. This is also the case if you are suffering from a health condition which is linked to, or aggravated by chemical intake.