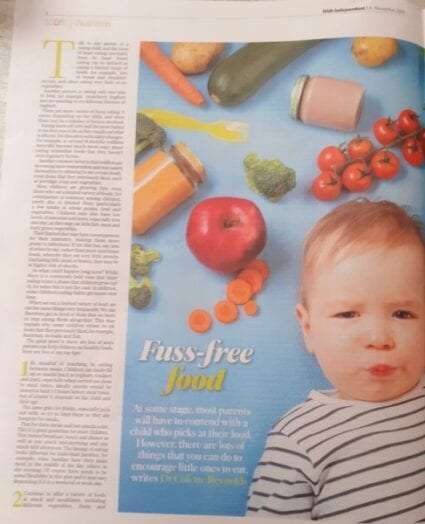 At some stage, most parents will have to contend with a child who picks at their food. However, there are lots of things that you can do to encourage little ones to eat.

Talk to any parent of a young child, and the issue of fussy eating inevitably rears its head. Fussy eating can be defined as eating a limited range of foods, for example, lots of bread and breakfast cereals, and often eating very little or no vegetables. Another pattern is eating only one type of food, for example, strawberry yoghurt and not wanting to try different flavours of yoghurt.

There are many causes of fussy eating; it varies depending on the child, and often there may be a number of factors involved. Eating starts off very well for most babies in the first year of life as they usually eat what is offered. Yet this often noticeably changes; for example, at around 18 months toddlers naturally become much more wary about eating unfamiliar foods that they haven’t seen regularly before. Another common factor is that toddlers are becoming more independent and may assert themselves by refusing to eat certain foods, even those that they previously liked, such as porridge, soup and vegetables.

Most children are growing fine, even those who eat a limited variety of foods. Yet constipation is common among children, partly due to limited fibre, particularly a low intake of whole grains, fruit and vegetables. Children may also have low levels of essential nutrients, especially iron and zinc, as they may eat little fish, meat and leafy green vegetables. Their limited diet may have consequences for their immunity, making them more prone to infections. If the diet has, say, lots of white bread, rather than more nutritious foods, they may be at higher risk of obesity.

So what could happen long-term? While there is a commonly held view that fussy eating is just a phase that children grow out of, for some this is not the case. In addition, some children’s eating habits get worse over time. When we eat a limited variety of food, we eat the same things very frequently. We can therefore get so tired of them that we want to stop eating them altogether. This may explain why some children refuse to eat foods that they previously liked, for example, hummus, avocado and fish.

The good news is there are lots of ways parents can help children eat healthy foods. Here are five of my top tips:

1 Be mindful of snacking, ie, eating between meals. Children can easily fill up on snacks (such as yoghurt, crackers and fruit), especially when served too close to meal times. Ideally snacks would be served at least 1-2 hours before meal times, but of course it depends on the child and their age. The same goes for drinks, especially juice and milk, so try to limit these so they are hungrier for meals. Plan for three meals and two snacks a day. This is a good guideline for most children. This means breakfast, lunch and dinner as well as one snack mid-morning and one snack mid-afternoon. The timing of eating looks different for individual families; for example, some families have their main meal in the middle of the day, others in the evening. Of course there needs to be some flexibility in this plan and it may vary depending if it is a weekend or week day.

2 Continue to offer a variety of foods at snack and mealtimes, including different vegetables, fruits and whole-grains, even if they’re not eaten on that occasion. While it is tempting to ‘hide’ some nutritious foods, including vegetables, this means your child may not get used to their appearance, taste or texture. It is fine to blend veggies sometimes, for example, in tomato sauce but it is better not to always hide veggies.

3 Serve family meals. This involves all the family sitting down and eating together. There are many benefits to this, particularly role-modelling. This means adults showing children that we eat and enjoy a variety of nutritious foods, including different proteins, vegetables and whole-grains. Depending on the schedules of individual families, this may be once or twice a week, for example, on Saturday evening or Sunday brunch. It is best to aim to eat with children as often as we can. It’s often the case that toddlers and children end up eating different meals to the rest of the family but it’s better when everyone is served the same food. This sets up the expectation that the same food is for everyone and there are no ‘special’ foods just for children, for example, fish fingers for children and fish for adults. One way of doing this is serve all parts of the meal separately —for example, with a roast chicken dinner serve the chicken, potatoes and vegetables separately, with optional gravy on the side. Each individual can then choose the foods they wish to eat at that time.

4 If a meal is not eaten at the time, and a child is hungry shortly afterwards, it is better to re-offer some of the meal. In contrast, serving an alternative, such as toast sets up the expectation that there is a ‘back-up’ or other food available, instead of the dinner. This may lead some children to ‘hold out’ for their preferred food such as yoghurt, if they eat little or none of the dinner.

5 Get children involved with food. This can involve very simple tasks like helping with shopping. Young children in particular want to be involved and have more responsibility. While involving children can be messier, it can also be lots of fun. Involving children also allows them to feel more control of what they are eating. Children as young as two years of age can help with food preparation or cooking; once the tasks are age appropriate, such as helping to sort ingredients. One simple way of involving children is by giving them choices, for example, offer two or three choices and allow them pick one. This works best if the choices are quite similar, such as, would you like noodles or spaghetti for dinner?

First appeared in the Mothers & Babies Magazine in the Irish Independent